Shining a light on the exploitation and utter disregard for child and community safety by political and public figures, for strictly personal gain

A Gastonia police officer (who has not been named) is patting himself on the back this morning after undoubtedly protecting a group of arcade-game playing children from an obvious, imminent threat: a 23-year-old man playing miniature golf with a group of friends of the same age. Read the story here: http://www.gastongazette.com/news/putt-71074-romero-offender.html

See, in 2007, 17-year-old Mr. Romero was convicted of the ambiguous charge, "sexual battery of a minor child". As usual, the state registry website lists the victim's age as "unknown" (seems like they'd have to know the age to get a conviction, but I digress), so we're left to wonder if this was a forcible attack on a helpless pre-pubescent child or a consensual encounter with a 15-year-old teenage girl. But based on the fact that Mr. Romero served no prison time and instead was sentenced to probation, it seems logical to infer that this is was a "Romeo and Juliet" scenario.

Apparently this particular police officer spent a little too much time memorizing the faces on the registry, as amazingly, there was no "concerned citizen" credited with calling in the terrifying predator. Too bad, because the resources that were spent on memorizing, arresting, incarcerating, and prosecuting this clearly dangerous criminal could have been far better spent on things that might actually help some kids who need it. 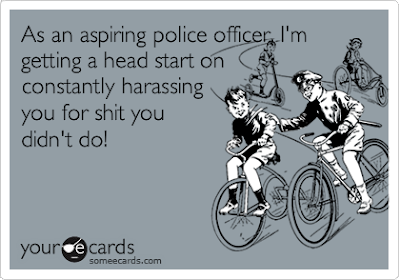 Well, this blog certainly makes its debut with a bang. Though this is only one of several contenders for today's Child Safety Fail of the day, I think it deserves its own page. Why? Because even those who aren't even remotely involved in law reform called out this bill for the foolishness that it is. Here's the article, written by Brianna Ehley of the St. Louis Post Dispatch:

Apparently, even in the midst of bringing Illinois into compliance with the infamous Adam Walsh Act (rejected by all but 15 states, and portions being repealed in several of those 15), lawmakers still weren't sure enough of their public approval ratings. So naturally, it's now illegal for people convicted of consensual teenage sex, childhood games of Doctor and streaking in college to dress up in holiday costumes. Because this method of "grooming" has long been documented as a serious and existent problem. LOL.

Now, obviously some registered sex offenders have victimized children - as in, they are adults who have sexually assaulted pre-pubescent children. But they are far from the majority of registered individuals. In fact, the most feared child predators - the ones with multiple victims spanning over extended periods of time - unfortunately are usually the best at avoiding capture (aka: NOT on the registry). What good is a list to cross-reference mall Santa applications against if it doesn't contain any actual threats? And what good is a law that is devoid of any ability to identify someone who has spent a lifetime learning how to avoid being identified?

It seems to me that Illinois lawmakers could have come up with far better uses for their time and Illinois citizens' tax dollars than an umpteenth version of "tough on crime". You can bet that when it comes down to it, those same lawmakers aren't going to rely on this bill to keep their children safe.

What do you think?
Posted by Unknown at 3:50 PM No comments: